Listening To Nature's Words Of Love Caring For Our Common Home

Click here to read the Lenten Pastoral Letter from Bishop Leahy in full. 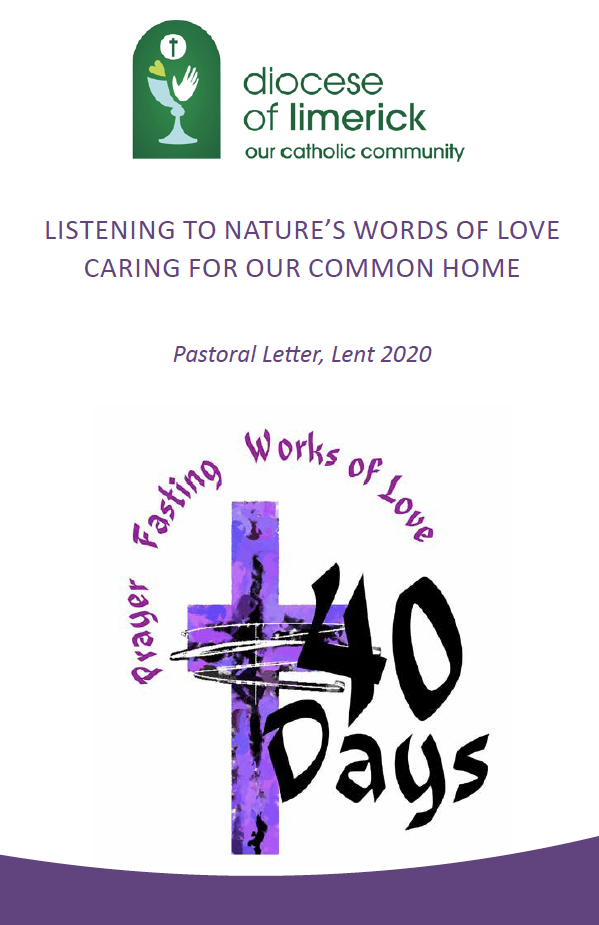 Lent is a special time. It offers us forty days to take stock, take some steps, and take hold of our lives as disciples of Jesus Christ. It’s a time of conversion. This year I propose we focus on what has been called “ecological conversion”.

When in 1968 the astronaut William Anders took a photograph of the earth with some of the Moon’s surface also showing in the photo, little could he have imagined the impact it would have. As he himself put it on the fiftieth anniversary of that event, “We set out to explore the moon and instead discovered the Earth”. The US Post Office issued a stamp with that Earthrise photo over the words ‘In the beginning, God…’. The awesome and stunning photo of our planet led many in a reverent silence to whisper the word “God”. God who is Love created the world.

Our planet is indeed beautiful and awesome it is also so vulnerable and so finite. Fifty years on from that photo the words of a Pope jolt us about how we have treated creation. In an interview-film entitled “Pope Francis - A Man of his Word” directed by the German film Director, Wim Wenders (I’d recommend the film as good watching during Lent. It is on Netflix), Pope Francis doesn’t mince his words: “If you ask me who is the poorest of the poorest of the poor, I would say Mother Earth. We have plundered her. We have abused her.” He goes on to remind us we are called to be caretakers of the earth.

It is his concern for the care of the earth that made him write what has become his most widely read encyclical: Laudato Si’. Taking up a phrase from St. Francis “May you be praised” (in poetic Italian that is: “Laudato Si’), Pope Francis dedicates his encyclical to the theme of the environment. Many were astonished at the strength of that encyclical. In it he calls all of us to ecological conversion. He encourages us, as he did at the United Nations, to counter a growing “culture of waste.”

In the past year, Greta Thunberg has captured imaginations and minds. Not just her. Many young people have expressed their concern over what is happening our planet. They are really concerned about the world they are inheriting from previous generations. In schools across the Diocese children are enthusiastic about the Green Flag awards. Young adults are searching for new ways to save our planet. It is important for those of us who are older to recognise that young people have the antennae of the future. Their voice is prophetic indicating God’s will for us.

Click here to read the Lenten Pastoral Letter from Bishop Leahy in full.