Born at Holy Cross, Co. Tipperary, he was educated at the C.B.S. in Limerick and at St. Patrick’s College, Maynooth, where he was ordained in June 1867. 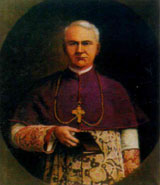 Having served as CC in Rathkeale, Bruff, St. Patrick’s Adare, Newcastle West and St. Michael’s, he was appointed bishop in May 1886.

Honoured by Pope Leo XIII for his part in the Plan of Campaign, he ended his life with approval from his people for his stand against General Maxwell in the wake of the 1916 Rising.

He is buried in St. John’s Cathedral.